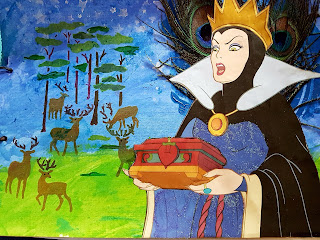 Joanna's journal is "Fairy Tales", anything from Disney to Grimm is how Joanna describes the content she is inviting participants to create a page on.  She also said that her favourite fairy tale was Snow White and how she favoured Maleficent the wicked stepmother.  In every version of Snow White that there is, the Queen has a different name, ranging from the original Grimm story where she was called Queen Grimhilde to the later versions from Disneyland where she was called Maleficent, so I will just refer to her as the Wicked Queen.  As I too have a soft spot for the Wicked Queen after playing her in a local production as a child which ran for about three weekends, so  I decided to do my page featuring the Wicked Queen. 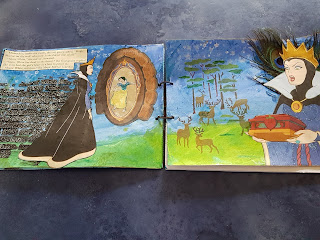 I painted the background in blues and mauves and a bit of green at the bottom.  Using a stencil I painted some stars in the background at the top of the page.  I also used a stencil with textured paste to do some feathers on the right of the page as a background for the queen and I used a wall stencil with graphic textured paste from Finabar to represent the castle wall on the left page.    I then used some peacock features on top of the stenciled feathers to further embellish the area behind where the Queen cutout was going.  I also used a stencil to create some trees and deer on the page to represent the forest surrounding the castle to which Snow White ran away and where the Queen tells the huntsman to find her and cut out her heart.   I used three different books about Snow White to cut out a couple of versions of the Queen, the mirror and Snow White .   I cut the center out of the mirror and stuck some silver paper in the frame to make the mirror more realistic.  I stuck a small version of Snow White on it.  I then lightly painted some Inka Gold in white over the top of some of the textured wall.  I stuck the large version of the Queen on top of the feathers and the smaller version and the mirror on the left page. 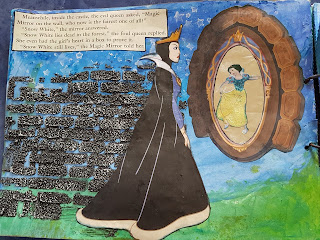 I painted the Queen's dress and Snow White's dress with glitter.  I used Glossy accents on the Queen's  crowns, her amulet and the box containing the heart to give them a 3D appearance.
I then stuck a cut out verse from one of the Snow White books at the top of the left page.

I will be sending onto Lisa Jones on the 1st August.
Posted by Joanm at 4:43 PM