Jan's journal with the theme of " Favourite" is another lovely small journal.  It already has some gorgeous layouts created in it.  I was going away for a three day crafting weekend and this was one of the things I took with me to do.   I had planned to do heaps of things but actually did not finish one thing.

I started off thinking that I would fulfill the theme  by using my favourite inks and other media and would find a phrase to suit.  However my crafting muse was no where to be found that weekend and after gessoing over the background twice, because I did not like what I had done.  I finally settled on a pale pink background created using distress oxides.  I did no more to it that weekend.

Picking it up some time later in week at home, I was still not sure where I was going with it, so I added to background with some stencils and background stamps.   I then stenciled, drew and painted some flowers and grass along the bottom.  I then decided that some of the flowers needed to be raised so I used clear texture paste to paint on top of some of the flowers.  I still had no idea where I was going, so I thought I would approach it from another direction and find a quote that had something to do with favourites.  I started flipping through some books that were on my table, one of which was an older copy of Winnie the Pooh, which I have used in collage etc, so not much of it left and about two pages in I came across the phrase on the left page,  and a few pages down, the quote on the right page.

Now most of you know that I cannot draw to save myself, but the drawings in this little book were so simple, I thought that I could perhaps copy them.  Now to find a place for Pooh to sit amongst the grass.  I squeezed him in somewhat on top of a couple of flowers and drew Piglet further up the page.
Although no masterpieces, I was pleased with the drawings for me.  I then wrote the quotes by hand in pencil and went over them in gel pen.

After all that it was a very simple page in the end.  I hope Jan will see past the bad drawing and will know that I tried my best. 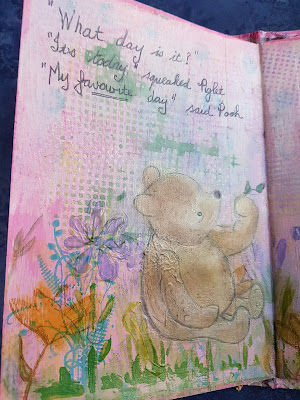 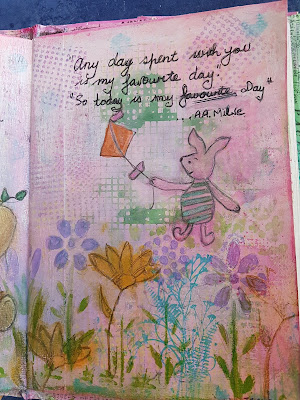 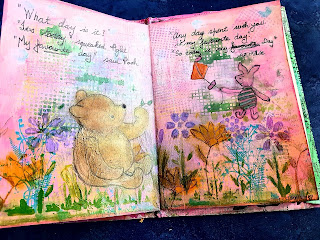