I based my layout on the tale of Hansel and Gretel for Jenny's journal. This is a well-known fairy tale of German origin and published in 1812.Hansel and Gretel are a young brother and sister kidnapped by a cannibalistic witch living deep in the forest in a house constructed of cake and confectionery. The two children escape with their lives by outwitting her.

I started by putting some colour on the page using gelatos and then decided to do a collage spread. The left side being the imagery of the children walking in the forest where Hansel is dropping pebbles on the ground so they could find their way out. And the right hand side being where the children come upon the house made from all kinds of sweets. 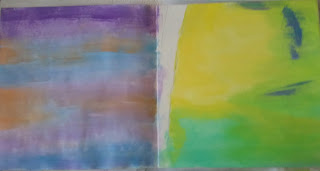 I collaged the trees on as well as the images of Hansel and Gretel and in the center of the layout is where they were coming out of the forest finding the witch's cottage. 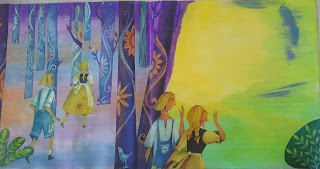 I tried to make the witch's cottage look child like, for something different, so I used some patterned paper, cut the cottage shape out and they collaged some sweets on the front. 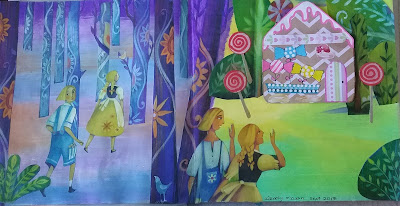 Not forgetting about the witch, the front of the cottage flips down to reveal the wicked witch with the imagery of the flames around her from when Gretel had pushed her into the fire. I drew the face of the witch from an image I found off google, coloured some flames around her head using coloured pencils and printed the title on the flip down side of the house. 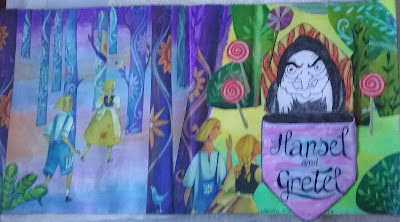