Lee's journal 'Layers' has a real junque journal feel, and Lee's brief was to "stretch yourself, try something new, don't worry about the result." She said she was "not precious about art, it's all about expression," and "above all, I don't believe that 'tidy', 'neat', or 'pre-planned' have any place in the process."

Great! I thought.  Though Lee also said this journal wasn't so much about physical layers, I did want to try and incorporate some layers into my work.

On Pinterest, I found an amazing quote to use, which I printed using a new font I found: 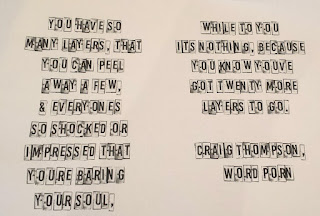 This quote gave me an idea to do a face with many different layers.  So I drew a template,
and used it 5 times with different mediums. 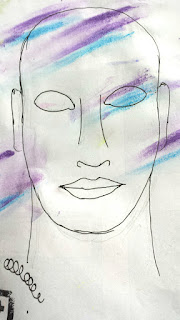 Unfortunately I forgot to photograph each of the faces after I was done!

The mediums I used were:

I then tore all of these new faces up (that was hard!) and put them back together again all mixed up.

It looked weird but I liked it!

I covered the double page spread with different book pages, then laid my new face on the right hand page.  I intended to do the above quote on the left.

But then, I had so many face pieces left that I thought, I should do one on the left side as well!

So I did.  But then came the dilemma of where to put the quote?

Easy, I thought.  I'll print it on baking paper and lay it over the top.

But that didn't work; my printer wouldn't recognise the paper as it was too thin.

So I glued a piece to some photocopy paper, thinking I'd remove the baking paper afterwards.  Still wouldn't go through.

Next I tried a Creative Memories plastic page protector cut to size.  Yes!  That seemed to work - until I realised that the ink wouldn't dry and it just smeared everywhere.

Must be my el cheapo printer, I thought, so decided to email the word document to myself at work to print there.

The next day at work I attempted to print it, on another CM page protector.... but since it was on a word document, it didn't recognise the font I'd used, so gave me good old Courier instead.  No thanks!

So that night I again sent it to work, this time as a PDF.  Yes, that would work.

Thus on Thursday at work I again attempted to print it, using the bypass tray (I was a bit worried about the page protector getting stuck in our expensive new copier, and having to explain to the boss why it needed a repair...!)  But again it didn't work, getting stuck half way and smearing everywhere.

I was almost at wit's end then, thinking there must be a way I can do this!  As a last resort, I tried printing again with an A4 heavy duty page protector.  Success at last!  Though it did get stuck again, and one of the lines is very light.  BUT IT WORKED.

This is definitely not the prettiest art I've every made, an my daughter Mel thinks the gel pen face is really creepy. but I'm quite happy with the result.

Here are the two faces: 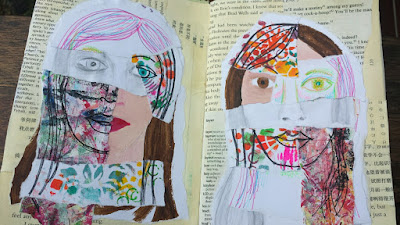 And here's the end result, with the quote over the top! 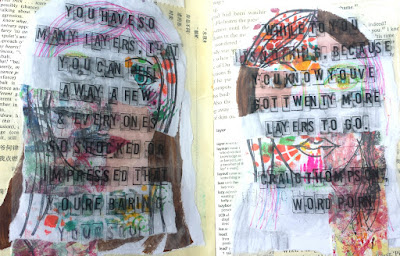