Ooh what a theme.  There are so many hundreds, if not thousands, of fairy tales.  How to pick one?

Good question!  Mel still has her old book of fairy tales, so I went through that.  Nothing really grabbed me.  I thought about my favourite fairy tales, at least visually: Hansel & Gretel, Peter Pan, Sleeping Beauty, Beauty and the Beast.  I even thought about 'modern' fairy tales, and was so close to doing a page about Harry Potter!  But that could be another journal theme... 😜 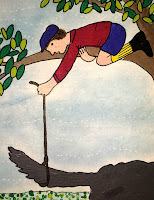 I wanted something bright and colourful, so looked into foreign fairy tales.  The African tales were mostly about animals, and I remembered one about Babaji and the tigers which I liked... but it has many connotations of racism, so I didn't want to go there.

In the end, some music kept popping into my head.  Not really a fairy tale; more of a musical.  But traditional and oft told, so I went with it - and thus did my spread on Peter and the Wolf.

For those that don't know the story, it's about a boy who lives with his grandfather in the woods.  His grandfather tells him not to go outside the gate, for there is a wolf who lives in the forest.  His duck does not heed this warning, and is promptly eaten by said wolf.  Alive, of course.  Peter's bird decides to torment the wolf, and while it's distracted, Peter climbs a tree, intent on catching the wolf! 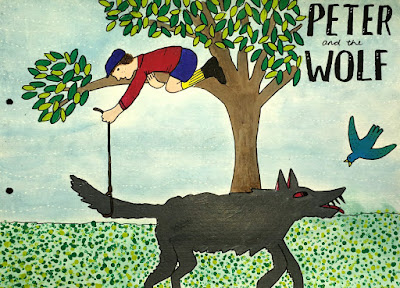 Miraculously, Peter does catch the wolf by lowering a rope around it's tail, and pulling it tight.  Sounds a bit unrealistic to me...

Two hunters in the woods come upon Peter with the 'captured' wolf, and want to kill it. 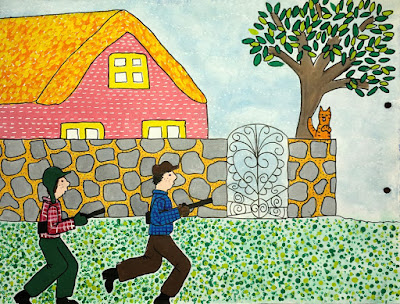 But surprisingly, Peter doesn't want to kill the wolf.  He decides that they should take it to the local zoo instead.  What kind of fairy tale is this, where no-one gets killed?  Well, unless you count the duck, but apparently he can be heard quacking from the wolf's belly... 😁

So here's the whole spread.  I gessoed the pages, then did the sky and grass in watercolour which was applied with a sponge.  It was then painted with Dylusions paints - I just love the luscious colours.  Then finished with black and white fineliners.