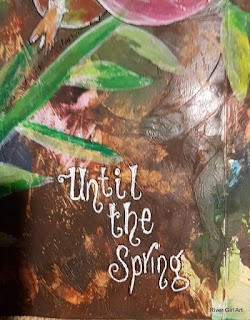 Mothering and children leaving the nest has been quite big for me of late, my firstborn has not followed any preconceived ideas I had and its been a pretty rough period so when Natasha came around for a visit and to show me her Goddess journal I know I wanted to work somehow with the Demeter and Persephone theme. 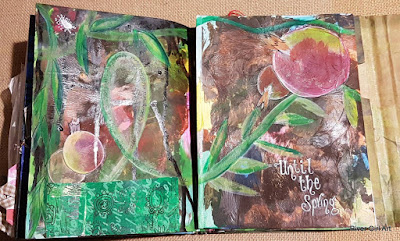 Its been quite a stressful, dark and worrying time for me as it was for Demeter and of course Persephone was taken to the Underworld so I wanted to make a cave or a deep cavern to build my pages from and what a way to ground my pages! I also had to weave in the pomegranates,one thing about working with such rich myths is there are many symbols you can include. 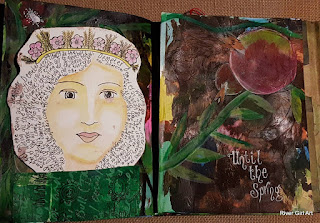 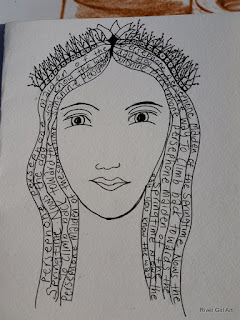 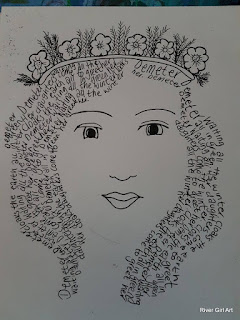 I had been thinking back to when my firstborn was little and I remembered this song chant we used to sing of Demeter and Persephone and I wanted to include those words so each of my Goddess's got her verse for her hair.

These songs come from the Reclaiming tradition ,
Starhawk and Anne Hill.

I have also been wanting to create interactive pages lately so this one needed to have some of that , I ended up creating 2 removable Goddess heads and I had to create little 'holders'to secure them into the cave

I began writing their story on the back of them but it was just too long so I made a mini book to tell the story and it had to be in a pomegranate of course,

Here is my spread with the flap open showing Demeter, the pomegranate journal and Persephone, they all are easily removable and fit snugly in their spaces.