My spread in Lisa's LYRICS Journal 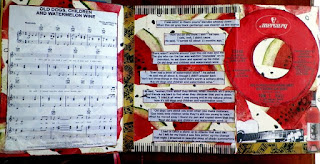 I chose Old Dogs, Children and Watermelon Wine by Tom T. Hall as it was a favourite song of my Father and always reminds me of him. It was the 1st thing that popped into my head when Lisa chose her topic.
I started with a watermelon napkin as the background and debated whether to Gesso over it...I didn't!
I then arranged the images which took some time. I added some Washi Tape with music notes and piano keys and tried to include a picture of Tom T. Hall. I ended up cutting out the Guitar that he was playing and used that and an image of a bottle of Watermelon Wine.
On the flap I used a couple of images shown below. 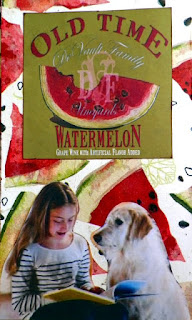 Posted by rozwillster@gmail.com at 9:27 AM