I was really looking forward to working in this journal: great  theme; Louise always makes lovely journals to work in; and last one of the round and year!

I'd done  a bit of research earlier in the year from my faithful  Pinterest, and decided I'd like to play with tarot cards.  But not literally.  I've never had my fortune told, my palm read, my cards read.  I'm not overly superstitious: I'm happy to have a black cat cross my path, as long as it stops so I can pat it.  I'm not a huge believer in portents, or signs, or religion, come to that.  I'm too pragmatic.  But I'm not a non-believer either (which probably doesn't make much sense!).  What I mean is: I think something is out there, but I'm not sure what it is.  And so many peeps have had wonderful (or scary) things happen to them, that I can't just put down to science.  Case in point: my mother in law passed away 9 years ago from cancer, and both my sister and law and her cousin have contacted her via separate clairvoyants.  So.....

Anyway, back to the cards.  Tarot cards are broken into two sections, Major Arcana and Minor Arcana.  I chose to concentrate on the Minor Arcana, or suits (similar to normal decks of cards).  Why?  Mainly because I sort of cheated and wanted only good readings - there looks like a fair bit of doom and gloom with the Major Arcana.  So I picked cards that appear to tell you happy stuff.  Which is why I did not do a 5 - not nice in any of the four suits!  I got all my tarot info from this website.

So first thing I did is make a dozen tarot cards, using an old deck of cards that I sanded, painted and teabagged. 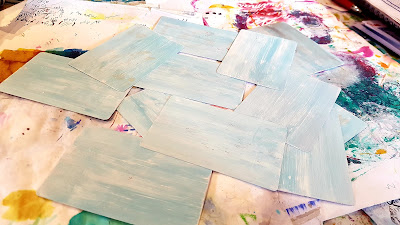 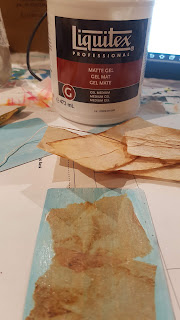 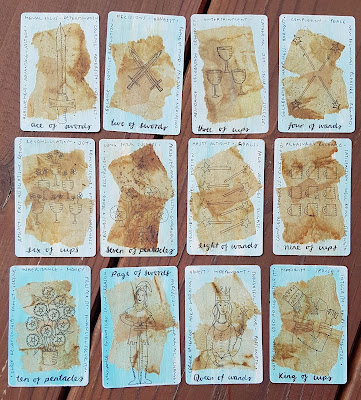 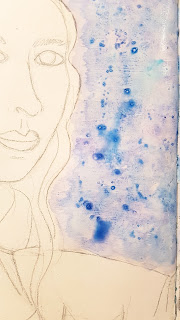 Then onto my gypsy.  I drew in my seer, then watercoloured the background with blues and purples,   followed by some salt.  I wanted it to look galaxy-like, which it didn't, but I liked it anyway. 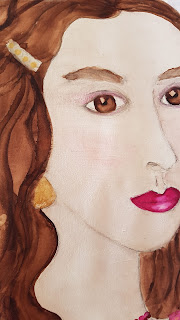 Next I watercoloured my gypsy using Koh-i-Noor paints and a bit of white gouache.

She's holding the cards, and I wanted her to really hold the cards, so I created her hands from separate pieces of double thickness watercolour paper, and glued them on. 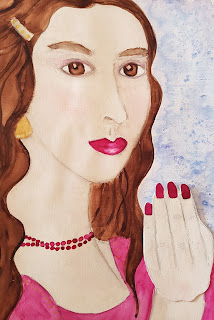 So all of the cards can be taken out, and switched around etc!  She looks a bit weird holding nothing... 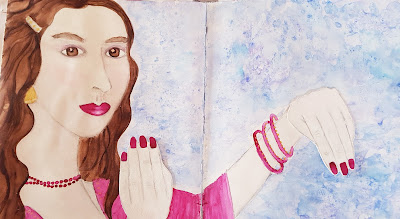 And here she is holding her tarot cards. 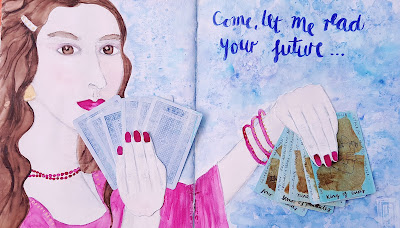