The merry month of May brought Jenny James" very colourful Art Journal to my door.  OMG!!  Whatever was I to do?

I had signed up for a sketch class and one of the tutors introduced robots and I thought there's a bit of nonsense.  So I had an idea,  but no idea how to run with it. Suddenly a totally nonsense song from the 70's popped into my head and I was off with my Ball Bearing Bird.

I took some advice from Jenny's intro and sprayed and splotched and had a wonderful time with my background.  I printed off my robots and coloured them....I was on a roll.  I laid them out to see how they looked....AND...I hated it!! 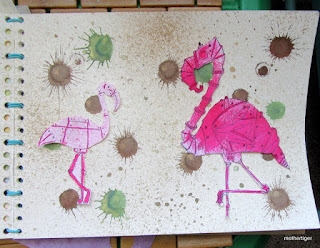 Now what?  I tossed up all sorts of ideas including gluing the pages together to make them disappear and finally decided a full cover up was needed.  So I grabbed the Payne's Grey and goodbye sprays.

Printed out the words and a little stamping and I called it done.  I hope you like it Jenny.  Here are close ups. 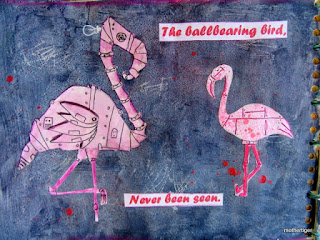 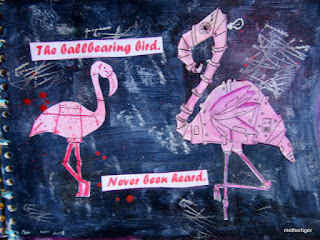 Posted by mothertiger at 5:07 PM