I really had fun with this, I love anything to do with space exploration, for eg: astronomy, ufo's, event horizon's, intersteller, rocket ships (lunar modules, international space station), our history of space evolution, obviously the apollo moon landings, (even though all Apollo missions did not make it to the moon), as you can see, everything, everything to do with space space space.
So when I had the opportunity to dive into this journal, I knew it was going to be fun and exciting.

You may notice an obvious similarity here: Circles haha, obviously for me it was a no brainer, I wanted to do the solar system, and that would obviously need to include spheres, similar to my circles/spheres in Meg's bucket list journal. 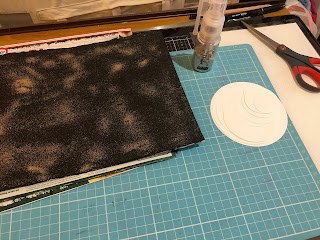 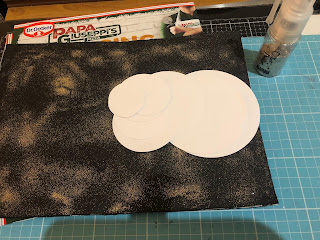 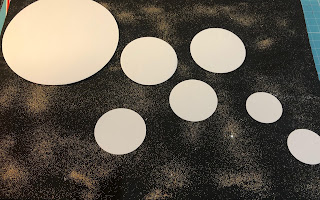 I went to my A4 printer paper stash and grabbed about 3 to 4 sheets and glued them together for stability. I cut two A5 size pieces of cardboard to add sturdiness to the working surface, it worked really well.

Firstly I painted black gesso all over the whole area, once I did that, I quickly used a glitter duster spray bottle to spray dry 'Ranger distress glitter dust', in the colour 'vintage platinum', for star light effect.  I then waited for the gesso to dry before adding more work. By the way, the circles I used are the Sizzix framelits 8 piece die set. 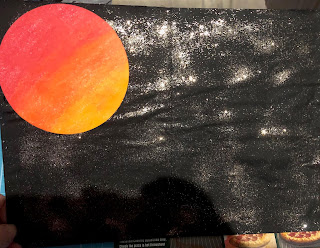 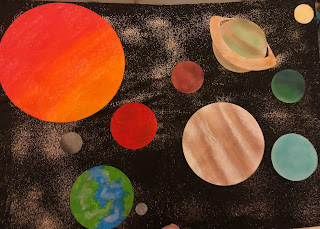 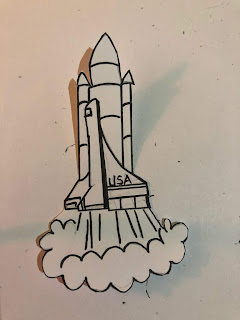 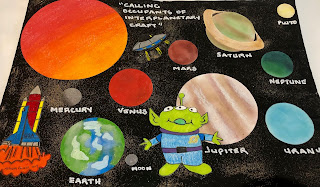 I began with the sun, and then tried to place the planets as they are in our solar system. I would call this more of a caricature representation of our solar system. I wanted to add a bit of comedy to the whole thing by drawing and colouring in a martian from the toy story movie series and also drawing a ufo. I wanted to add the USA rocket ship to represent the many launches into space. I know the placing and sizes of some of the planets are off scale but I think you all know what I am getting at. Lastly, "Calling Occupants of Interplanetary Craft" is a song by Klaatu, originally released in 1976 on their first album. The year following its release, the Carpenters covered the song, using a crew of 160 musicians. The Carpenters' version reached the top 10 in the UK and Canada, and charted at number 1 in Ireland. I thought this was an appropriate song to include, I loved listening to it as a youngster.

Anyhow, I hope you like it Amanda, thank you for this awesome opportunity, it was sooooo much fun :D

Posted by Melissa Guest at 7:06 PM