Lesley Journal is A4 and made up of lovely thick paper. The existing pages from other participants are all wonderful and so much better to see them in real life.

This month I picked a quote I wanted to use first and then made the page to complement it.  I originally envisaged a spread with lots of white space, but it did not turn out that way.  As usual my mind had one thing in mind and my art muse had another.

I started by using a 12x12 stencil which has lots of small shapes randomly placed and translucent texture paste from Tim Holtz,  I used it all over the left page and on top and left side of the right page   I then used some Lindys magicals which are water colours to colour the left page.  As I said before at this point I was thinking lots of white area left uncoloured..I used greens, yellows, blues and pinks from different sets of magicals.  I really just wanted some drips but as usual I was heavy handed with the powers and ended up with lots more colour than I intended. The translucent textured paste took on the colours of the magicals beautifully.

On the right page I imagined a young women with lots of coloured hair making a statement of empowerment. As I can't draw I thought at first that I would cut one out from a magazine and collage on, but then I realised two things, A: as the journal is A4,  finding a face that I did not have to scan and enlarge  and still be able to print out in required size after cutting out was going to be a task in itself.  B: as the page was all about empowerment, should'nt I take the bull by the horn and try to draw my own face and have enough courage to use it. And so it came to pass that I drew freehandly a face on the right side and painted her up with some other watercolors I had.  Apart from vampire like teeth and a long crooked skinny nose, it was passable.  I could live with it mostly but not that nose, so I covered it up and tried again.   The journal then sat on my table for a few days, whilst I decided if I was going to let her live or was going to gesso her out completely.  By the time I had fiddled with her nose and eyes each day she waited, she kinda grew on me and I decided she could stay. I later on  added some feathers and bling to her hair and dress.

After adding some background stamping to both pages, I decided it still needed something. I then added some more magicals, this time some orange and pinks. I also dragged out some gold leaf sheets I bought about 9 months ago but had not yet used.  The foils were a beautiful copper base with green and blue type effects so fitted in with the colours already on the page. The pictures do not do justice to the fantastic sheen and colour of these.  I rubbed on first one colour where I had placed the size and later on when I accepted that I was not going to have much white space and that I should embrace the page that was emerging, I add a heap more in a slightly different colour pattern. I put it on the left page and only on the right page where the textured paste pattern was. I also added a small amount to her hair.

I then stuck on some borders I had in compatible colours to left and right pages.  The left got a multicolour one and the right a metallic pink one. Just as I had decided that it was probably done, and I should print out my quote and put it on, I found a packet of bright gold leaves on a banner. Probably a purchase from an op shop at some time, and I thought I had to add some of these to the page.  As they were gold rather than bronze I painted them with a bronze inka gold paste. I added one to the girl's hair and two to ground my quote.  The quote is from Coco Chanel.
I then sprayed the whole page with a matt protective spray. It is very different from what I imagined when I started out, but I started this year saying that I was going to let the art have control rather than my right brain, so hopefully this is proof that I am succeeding somewhat.  I hope you like it Lesley. 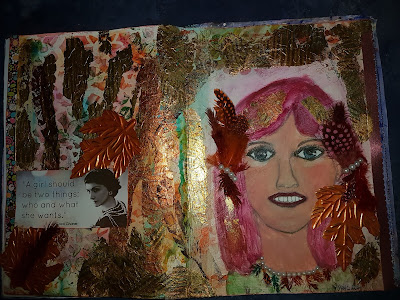 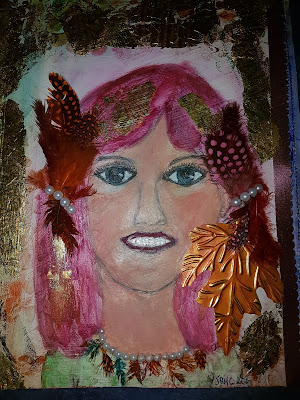 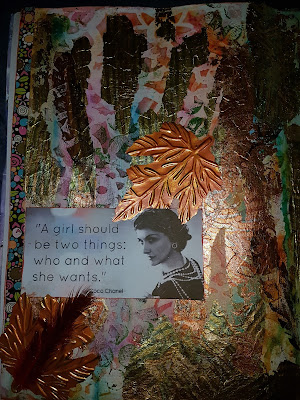