After now having made entries in two other people's journals, my trepidation has disappeared!  It's such a thrill to receive each book in the mail, see what's already been done, and then think about what I can  add to the journal.  I think of it as a huge gift we're all making each other, and what a delight it will be for all to receive the completed journals back after 12 or so months!

Rose's journal is a lovely size; a touch smaller than A4, with pages that open out flat to make a nice spread. 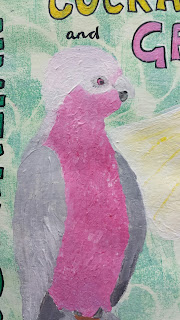 We live near a nature reserve with a creek running through it, and apart from kangaroos, foxes and the odd bunny, it's full of kookaburras, magpies, lorikeets, cockatoos, galahs, and the occasional rosella.  So I decided to do my spread on a couple of natives - the cockatoo and galah.

Noisy buggers they both are, but to me the sound is quintessentially Australian.  An old Aunty had a cocky in a cage for years, but I much prefer to see them in the bush, alighting from an old gum.

I gessoed, then did a simple background with watercolour overlaid with a repeating leaf stencil. 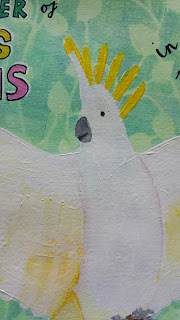 This pic on the left isn't very clear, but he's my galah, done in acrylics.  Growing up in country South Australia we lived next door to a park with a huge population of cackling galahs.  We used to delight in clapping our hands loudly to get them to disperse.

Next to him is my sulfur crested cockatoo.  Being predominantly white, I had to do about 26 coats so you couldn't see the background underneath!  Eye rolling stuff because in Joan's journal I did the background afterwards because I hadn't decided what to do - maybe next journal I'll get it right...

Then on to a bit of journalling.  Interestingly, google tried to tell me that a group of cockatoos was known as a cockfest.  I don't think so!  Didn't think Rose would appreciate that in her journal, so I went with "There is nothing more Australian than the clatter of cockatoos and galahs in the bush!" 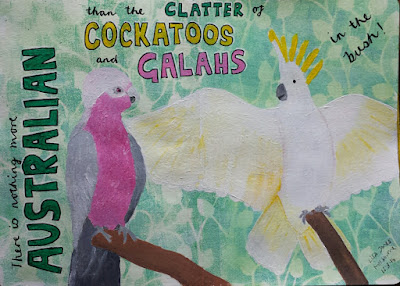 I hope you like this page Rose!  I really enjoyed doing it!