My galaxy art journal page ... by Jenny for Amanda

As some of you know, my first attempt ended in disaster after smooshing gesso through a stencil and stuffing it all up... I thought the background was so pretty before I did that. Lesson learnt, use either a foam blending tool with such runny gesso or use thicker gesso...! Or use paint like I'd normally do... 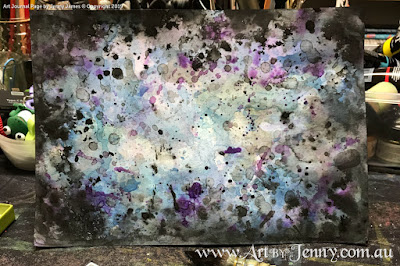 This was actually all watercolours... started off as a wash using blue, then add some purple. Then reverted back to my fave techniques of putting paint to the craft mat, spritzing with water, placing paper onto the ink and lifting upwards trying not to slide. I applied blue, purple and black each separately, drying inbetween using the hot air tool. Then I splattered all that black everywhere and sprayed the edges with water... then waited for it to dry again.

I made such an incredible mess on my mat, on my hands, over the paper! It was so awesome :D

The idea was that the galaxy of stars and spirals would then go diagonally across the page from bottom left to top right, with some of the Galaxy Song words weaving in and out of the stars.

Ah well... the next attempt turned out ok in the end. It was created on the back of the first sheet of paper so Amanda has both versions! 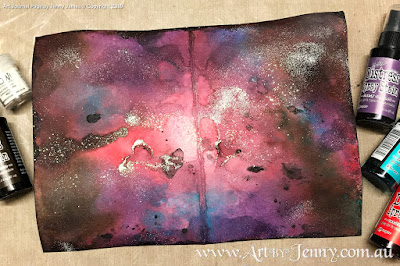 I sprayed the whole page with water, leaving it dryish in the centre (the water and ink blended towards the middle anyway which was fine, just trying to keep it lighter).
Started with Peacock Feathers (blue), then some Candied Apple (red) and splash of Dusty Concord (purple). Then around the outside, some Ground Espresso (dark brown).
I then placed another sheet of paper over the top, lifted off again then. Before it was dry (I had plenty of time as it was so soggy! lol), I sprinkled a sparkly white embossing powder, imagining that it could be visualised as distant stars.

It took a few minutes to dry with the help of the heat tool... mostly drying from underneath so as to not blow away all the powder. This pic is me waiting for the ink to dry showing close up of the embossing powder looking like star dust. 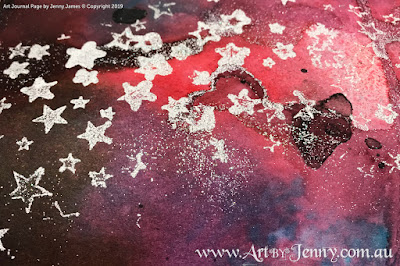 Once mostly dry, I used gel matte medium blended through Tim Holtz Layering Stencil "Falling Stars" to recreate the Milky Way. I made a bit of a mess but put blinkers on and kept going. I think next time I'd use a white paint or ink instead of a clear gel so I could see where the stars appeared!

Anyway, more embossing powder was scattered over the whole page and tapped off. I heated the page from underneath as well as on top as before. You can see I should have waited a bit longer for the ink to be more dry ... I've created a few huge clusters of stars, but they're so far away that they look squashed!

Check out the beautiful colours that are created from layering the inks. Sometimes they don't appear til they're dried completely. 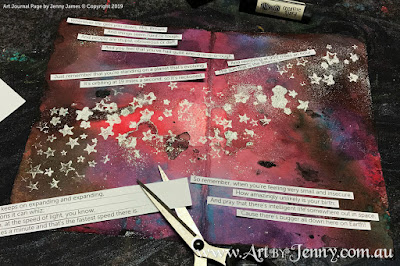 I've featured a song from Monty Python's Meaning of Life... its been flying around in my head since the swap began... The Galaxy Song. Its right at the end of the movie :)
The lyrics were borrowed from the internet, restyled and printed, then sliced into strips.

The first and last paragraph I left straight, but the rest was glued down as if following the Milky Way across the page. I used Dylusions Glue Stick and scissors to stick one or two words at a time, weaving and waving as it went. 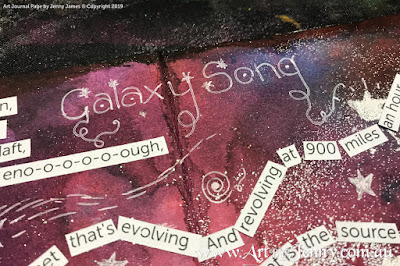 Once all the words were stuck down, I used a white gel pen to add a shooting star, few spiral galaxies,  filled in some stars and add the title in groovy starry lettering. 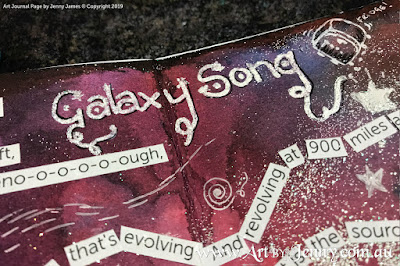 Then decided that I should emboss the lettering as well... so dragged out my embossing pen and wrote over the lettering, added the powder and heated it. Also added a slight shadow with a black fine felt tipped pen.
Then I simply had to draw in vintage fridge... at the beginning of the song, Eric climbs out of a fridge to sing the song to Mrs Brown. Totally looks like a real one hey? lol :) 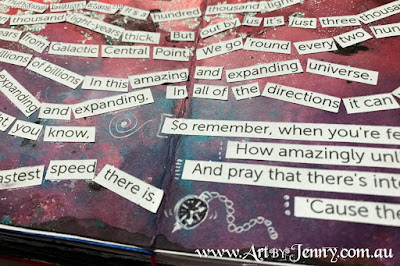 Being a song all about time and speeding lights, I drew a pocket watch flying across the page... 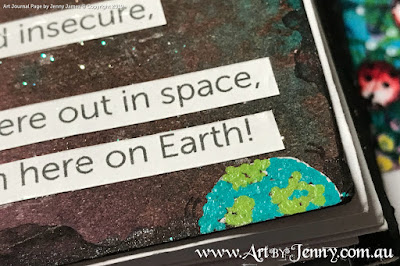 And added a tiny little mini Earth on the bottom right hand corner... 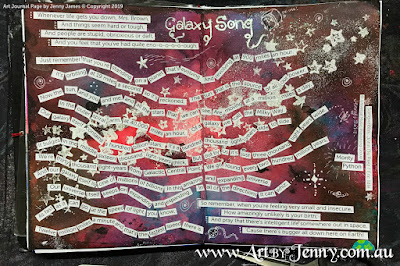 All finished. It was also going to have a tape measure but I don't know how to fit it in without covering the words. Must be the fastest page I've made but I like it and enjoyed making it. I hope you like it too!

On the right hand side are the legals :) I'll have to find the musical version of this song so you can all have it spiralling around inside your heads too! lol :) I love it, one of my fave songs, along with the Butterfly Ball by Roger Glover, Rainbow Connection by Kermit the Frog and Movin' Right Along by Kermit and Fozzie.