Jenny your journal is gorgeous, & Sharon I love your page as well.
It took me a while to figure out what I would or could do, so, as I had just done a class on making strange pictures out of collage, I thought, right, that's what I'm doing. It just evolved as I went along.

And so the stuff & Nonsense began.

I used colour burst powders for the base, followed with some stencilling & stamping.
I chose the figures I would do, & cut the pieces out of scrap paper. I wanted to use the quirky birds somewhere & the saying "A bird in the hand is worth 2 in the bush." So the birds went into their hands. I cut out the saying 3 times on my cricut, but wasn't happy with any of them, so I stamped the saying & used pictures. 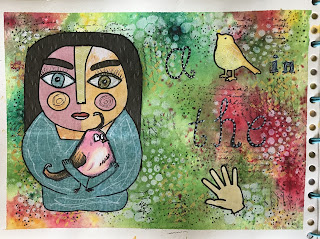 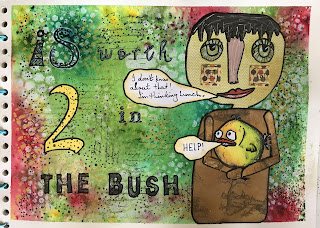 Still not enough nonsense for my liking. So I added the little speech bubbles. The boy is saying "I don't know about that! I'm thinking lunch", & the bird is saying "HELP!"

Hope you like it Jenny, It was fun to do.
Posted by Colleen Mulholland at 7:45 PM