Researching what to create inside Roz's beautiful book was fun ... there are so many Art Nouveau artworks that are perfect for turning into an art journal - Tiffany glass, sculptures, oil paintings, posters and advertising were just some of what I found. I'm sure you've all thought the same - "oh wow, where do I start?".

You can only um and arr so many times! I decided to recreate something by Théophile Alexandre Steinlen (November 10, 1859 – December 13, 1923). He's the artist who painted and designed the famous "Le Chat Noir" posters. Love that cat! Théophile painted a beautiful rooster too (which I almost used) but in the end I chose his "Lait pur Sterilise" poster. I love the cats in this poster, they have purrfectly happy faces!
I took a few photos of how it all came about, but really, all I did was trace a picture, colour it in with paints then outline it all with black pen and grey marker. Took ages and lots of waiting for layers to dry but its such a simple technique, especially when you're working with solid colours. 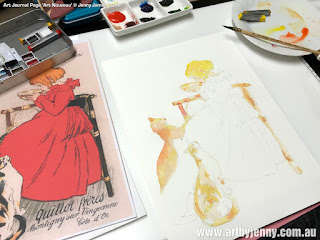 I used a lightbox to trace the design including the lettering. Always feels like cheating when I do this, but drawing people is not my best thing, and each time I drew her face, she ended up like a little old lady glaring at the cats. 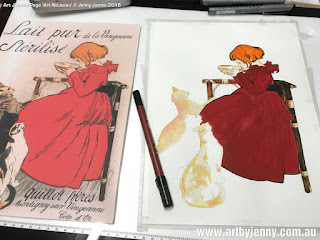 The first layer I used pale yellow and yellow ochre with a hint of red to warm up the yellow ochre then left it to dry. Next was the hair and dress... 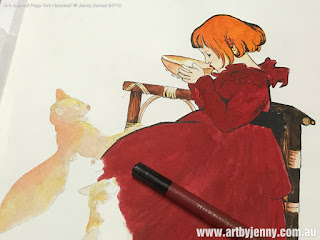 Watercolour isn't a very forgiving medium and I almost started again a few times. Black outlines can cover up a multitude of errors! lol :) It also helps reminding yourself "its fine, its art, there are no mistakes in art!" 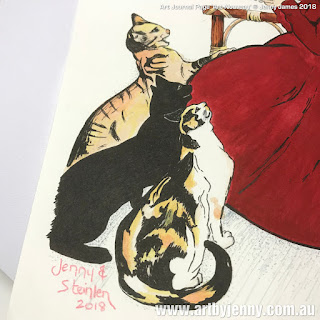 It wasn't until I'd finished the cats that I was happy with it... they're wonderful animals and Théophile captured their eagerness really well. They were a pleasure to draw and paint. 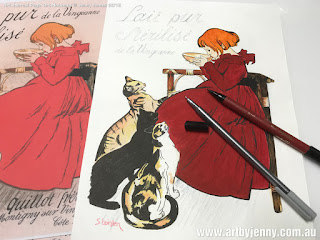 All outlining finished and drying, onto the words... after all, it is a poster! 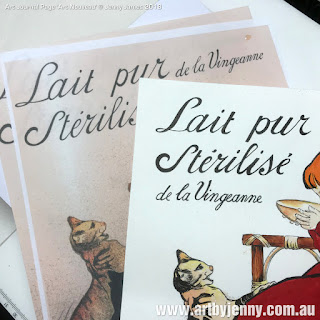 I traced the lettering too, putting the "de la Vingeanne" under the main tagline instead - just a bit of artistic license! My version is all about the cats and girl so left off the wording under her dress and the fawn background. 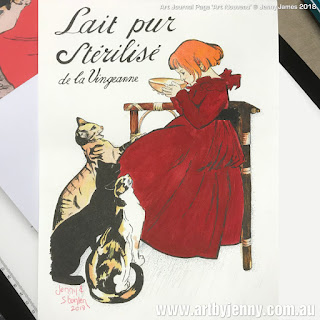 Lastly, I added marks and speckles using grey felt tipped pen. I traced the artist's name in red pencil, then added my name with his as well, pretty sure he won't mind! lol :) 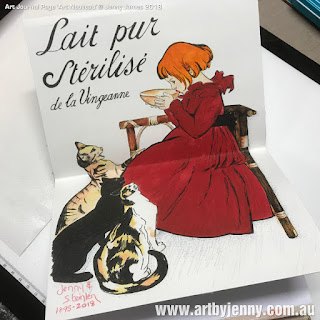 All finished, trimmed, folded and stuck inside Roz's book :) Phew, well planned - no cat has his head folded in half! Its like packing toy animals in a box for moving house... you can tell which box they're in by the air holes or nose sticking out of the box gaps!

In case you're wondering, its an advert for Vingeanne, a milk company who sterilised milk and claimed it was still so fresh and pure even cats want it to drink.

Thanks for checking out my painting for Roz :)

Have a wonderful creative weekend!
:)
Jenny