Jan's journal was in group 2 of the circle journal swap, which meant that I was not scheduled to do a page in this journal.  However when Jan had her journal returned to her at the end of its journey there were still a few blank pages in it, so she sent out a call on AASG to see if anyone else would like to do a page.  A few of us in group 3 put our hands up and I was one of them.The theme of Jan's journal was "Faces and Figures"

I received this journal towards end of December and I had planned to work in it over the Christmas and New Year period.   However in December, I unexpectedly lost my longest friend in Australia and to make it even worse, she was 10 years younger than me and had not even been ill. Anyway it knocked me back a little and made me look at little more closely at my own future. 2016 was a bad year all round for celebrities of my generation and older and many passed away. In Jan 2017 the Sun Herald newspaper printed an article in memory of most of those celebrities from around the globe and it was accompanied  by a collage of faces and figures of these stars.  When I saw this picture I immediately knew I wanted to use it for my page in the journal. 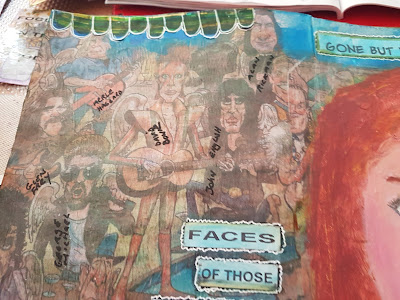 First of all I gesso and painted the background in similar colours of the collage.  The collage was set around a large swimming pool with the theme been a cocktail party, so there were lots of blue and green colouring.  I then scanned, reduced and printed the picture a couple of times on tissue paper.
I pasted  the tissue one copy on top of the other onto the painted background. That is where it was at until I went to a journal group meetup with Lynne, Lisa, Liz, etc. I took the journal with me to work on and when one of the ladies pulled out a basic face stencil to use, I thought I would like to try and use it also.  My mistake I think in retrospect was using a paste that was too thick, but hindsight is great.  Anyway I stenciled the face outline on the right hand side on top of the tissued faces. Now I cannot draw so this was a big step outside my square, even though I was using a stencil.  With a great deal of help from Lynne I managed to get a basic face but the textured paste was already set and was quiet lumpy in places and could not be removed.  Initially it was a very androgynous face and I was not sure where to go with it, however after painting and removing and adding more paint and taking it off and trying to fix eyes, nose, side of face and lips about 50 times over the next couple of weeks, it eventually turned into female, if  a somewhat scarred and battered one. During this period of trial and tribulation, in my mind she became representative of my friend Vikki, who was a natural redhead, a great horsewomen, a brilliant software developer, a professional photographer and a friend to many especially me.  So she stayed, and after adding some text and some doodled borders, I decided it was finished.  I hope Jan can live with this at least for a little while and then she can give her a fond farewell, before covering it all with gesso. 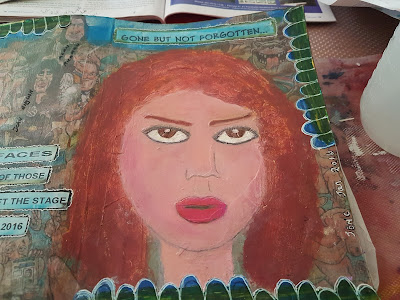