Robyn's journal has nearly finished its 'Travel around the World' and there are some great pages in there of where people have been, and where they'd like to go!

I'd like to travel... um... pretty much everywhere!  If I were doing a spread on where I'd like to go, I would have a hard time choosing.  Two faves would be Paris and Ireland, and they had already been done, by Pam and Joan.

So I decided to concentrate on a place that I've been to twice now - Vietnam.  We first went about two years ago, and took the then 15 yo boy and 13 yo girl, for four weeks.  They tolerated it, but didn't love it as much as Scott and I did.  So in May '16 we left the kids at home for almost three weeks and went on our own!  (Don't worry, there was some supervision... :))

We took a huge amount of photos, and I chose two of the places, and photos, that resonated with me, to do 'urban sketches' in Robyn's journal.

The pages are basically A5 size, so an A4 spread.  For my first spread, I drew a scene that we'd had the pleasure of witnessing in a small town southwest of Hanoi, called Mai Chau.

I've included a couple of process photos.  My favourite medium is watercolour, and I generally do a pencil outline first, followed by inking in with a .1 waterproof pen.  Pitt pen, Uni Pin or Micron are my usuals. 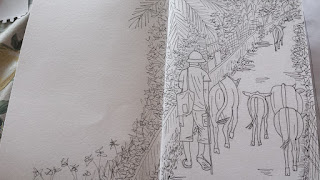 Then I'll watercolour and add journalling. 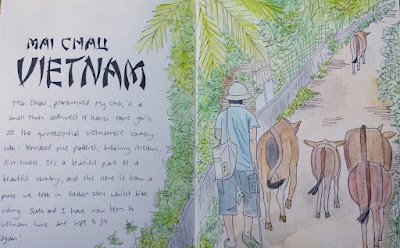 The journalling reads: Mai Chau, pronounced My Cho, is a small town southwest of Hanoi.  Here you'll see the quintessential Vietnamese countryside: terraced rice paddies, bubbling streams, stilt houses.  It's a beautiful part of a beautiful country, and this scene is from a photo we took in October 2014 whilst bike riding.  Scott and I have now been to Vietnam twice and hope to go again!

I have done this scene before, for a theme in the FB '52 Week Illustration Challenge' that I'm a part of.  Much easier the second time around!

For my second spread, I chose a scene from a village on the central coast, Nhon Ly.  Tried to do this one in more of a loose style.  The woman in the right foreground didn't turn out too well; she certainly wasn't that ugly in real life! 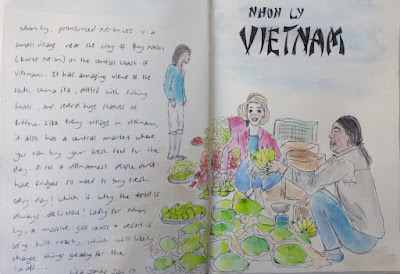 The journalling reads: Nhon Ly, pronounced Ne-on Lee, is a small village near the city of Quy Nhon (Kwee Ne-on) on the central coast of Vietnam.  It has amazing views of the South China Sea, dotted with fishing boats, and several huge statues of Buddha.  Like every village in Vietnam, it also has a central market where you can buy your fresh food for the day.  A lot of Vietnamese people don't have fridges so need to buy fresh every day!  Which is why the food is always delicious!  Sadly for Nhon Ly, a massive golf course and resort is being built nearby, which will likely change things greatly for the locals...

We heartily recommend Vietnam as a holiday destination if you haven't been (or even if you have - so much to see!)  The people are friendly, the food is great, it's amazingly cheap, and the scenery is breathtaking.

As I've said, Scott and I will be going back again.  Scott is pretty much hooked - he's now a destination expert on TripAdvisor for Vietnam, and has started a blog with his trip reports and some of our photos - Seriously Not.