In this journal I decided to created a page about RAGE. I thought it would be a fun to do and also I wanted to change it up a bit and use colours I don't normally use when I do journal pages.  Being an redheaded Irish women, I know how to do a good rage on occasions.

I love the quote  "Heav'n has no rage like love to hatred turn'd / Nor Hell a fury, like a woman scorn'd." which comes from a play called the  Mourning Bride, so my page is based on that quote.


The background is painted in red and yellow and I tried to create the illusion of flames just like hell is usually depicted. I had also put some texture on page using a zig zag stencil. I printed out two pictures from the internet. The face of the lady screaming I printed almost a A4 size, (this journal is very large) on to a thick white vellum sheet and then applied hot wax to it, to give it a more natural skin colour.  I was really pleased the way it turned out and the transparency of it allowed some of the colours from the page to show through also, which resulted in a nice red splotchy face, just as it would if  she was in a rage.  I cut out some coloured paper strips and placed them on her head to represent flames and then put a kettle and painted steam on top.(Letting off steam)  I then pasted some casino and potato chips on both pages to appear as if she was spitting them out (Spitting chips).
I put the other picture on the  page with a few strips of paper behind (sticking it to the man).  I printed out a copy of the quote in red and in a circle and then glaced it with yellow gelato and red around the edge.  The only letters I could find were plastic domes, so I used them to spell out rage in two places, small ones on the chips and larger ones as a header. Used a chalk marker and white gell pen to write the sayings on kettle and page.  Sprayed the pages with a decoupage varnish, which gives it a really nice overall finish.   This was really fun to make and I achieved my aim of using colours outside my comfort zone.   Hope Nathalie likes it. 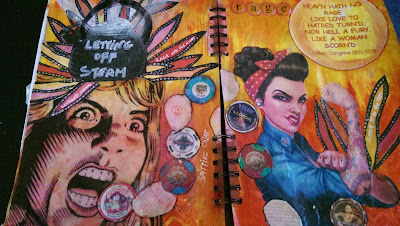 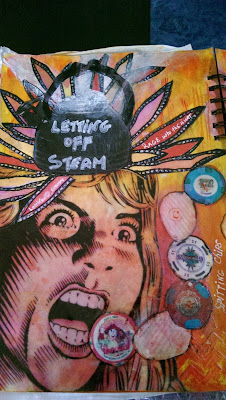 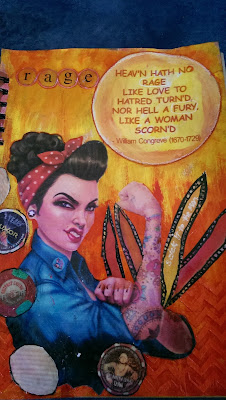